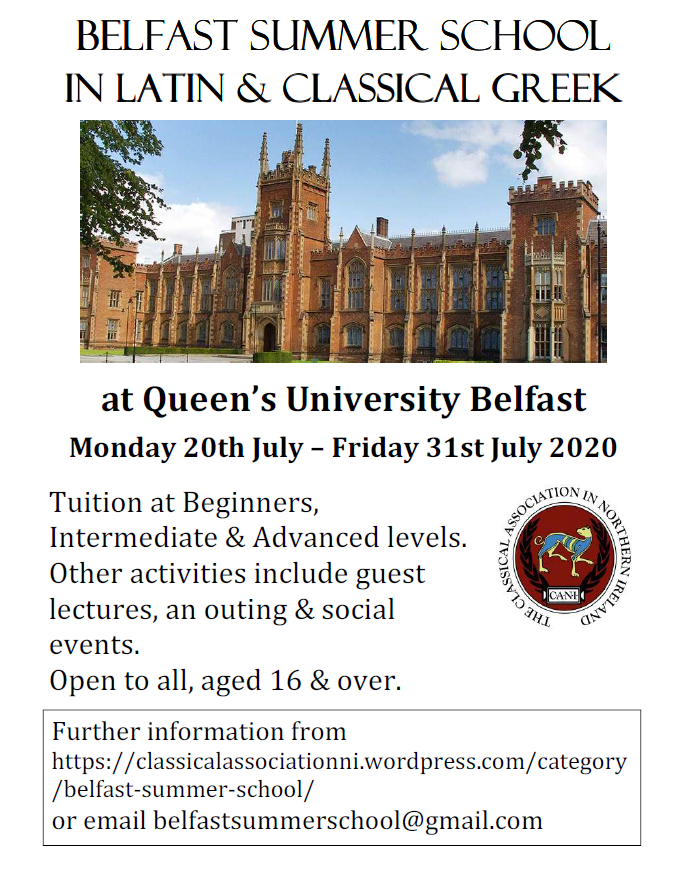 Six months on from the third Belfast Summer School in Latin and Classical Greek, a group of hardy students and tutors met at Queen’s University for a day of even more Latin and Greek. Feedback from Summer School participants had suggested that students were interested in studying these ancient languages more frequently.  So, in contrast to the annual summer meeting, in rather chillier temperatures, 14 students and six tutors met on Saturday 2nd February 2019 to spend the day consolidating, revising, learning new Latin and Greek grammar, and reading texts in the original language.

Beginners Latin students revised grammar which had been covered in the 2018 summer school, with tutor Amber Taylor using Ecce Romani, a textbook which some readers might remember from school!  The Intermediate Latin class began with some grammar revision with tutor Stephen McCarthy.  The aim of Stephen’s class was to read Catullus 51, the poet’s version of Sappho 31, a poem to his beloved, Lesbia.  Dr Laura Pfuntner’s Advanced Latin students read the story of Daedalus and Icarus from Ovid’s Metamorphoses and concluded the day with scansion.

The Beginners Greek tutor was Dr Kerry Phelan and her class reached the conclusion of chapter 1 of the Athenaze textbook.  Intermediate Greek students spent the morning revising grammar with tutor Helen McVeigh.  After lunch, the group translated a short passage from Xenophon’s Hellenica.  Lynn Gordon’s Advanced Greek class began reading from the speeches of Lysias and, after lunch, translated a section from Aristophanes’ Peace.

As co-ordinator, the most important result for me is that students enjoyed the day, which I’ve been assured they did.  Thank you to all the tutors for their hard work preparing for the classes, and for giving up their Saturday to teach.  On behalf of the Summer School staff, thank you to the students for their energy and enthusiasm for Greek and Latin, and we hope to see you again in July!

For information about the 2019 Summer School, its brochure and how to apply, click HERE

To see what goes on at the Belfast Summer School, have a look at the review of its 2018 edition HERE

Posted by The Classical Association in Northern Ireland on Sunday, February 10, 2019

This entry was posted in Belfast Summer School, Previous Events.

Also, due to the success of its initial appearance on the schedule in 2018, the Summer School will again be offering translation workshops on Thursday 1st August.

There will also be guest lectures, the subjects of which will be confirmed at a later date.

For more information, you can download the Belfast Summer School Info Booklet by clicking HERE

If you have any questions not answered here or in the booklet, please do not hesitate to contact Helen McVeigh at helenmcveigh@gmail.com

This entry was posted in Belfast Summer School, Upcoming Events.

Classes will be available in Latin and Classical Greek at beginners’, intermediate and advanced levels.  These classes are designed to review material covered in the summer school but it is not necessary to have attended the summer school: everyone is welcome.

Beginners classes will study basic grammar principles while classes for intermediate level Greek and Latin will revise grammar, leading to the reading of an adapted text.  Advanced classes will read original Latin or Greek.

This revision day is open to all over 14 years of age.  Please note that students aged 14 – 17 must be accompanied by a chaperone.

Fees for the day are £30.  Interested students should register with the summer school co-ordinator by sending your completed registration form and sending it to belfastsummerschool@gmail.com.  Payment is required to secure your place at the refresher day and can be made:

You can download a registration form by clicking HERE

Please contact the co-ordinator, Helen McVeigh, with any queries you may have (email belfastsummerschool@gmail.com).

In July 2018, 35 students and seven staff gathered at Queen’s University Belfast for the third Belfast Summer School in Latin and Classical Greek.  Many students came from Belfast and the surrounding areas and some travelled from as far as Enniskillen, L/Derry, County Donegal, County Clare, Birmingham, Kent, and even Massachusetts, USA.

This year we also introduced translation workshops on the Saturday. The Classical Greek workshop was led by Dr Martine Cuypers (TCD), examining the beginning of Homer’s Odyssey. The Latin workshops were led by our tutors, in which students looked at a few unadapted extracts from texts including Catullus, Caesar, and the beginning lines of Virgil’s Aeneid. All of our students performed admirably with these difficult texts after only a week of study.

The range of students was as diverse as previous years. In the Beginners’ Greek class alone there were high school students, a postgraduate student about to embark on the study of Anglo-Saxon, Norse and Celtic, and an English graduate entering his training for the ministry.  Among the Latin classes, there was a GCSE student who wanted to read a Latin text as preparation for A level, a solicitor returning to her Latin roots having rediscovered the Ecce Romani books from her schooldays, and a trainee primary school teacher who hopes to inject some Classics into her lessons.

Many others said they were taking the course for fun. Each of our students has their own story and it was a joy to meet them and chat with them during the course of the week. In particular, Anita, Amber and Ava have attended the summer school for three years’ running.  In 2016, Ava had just completed her GCSEs though her school did not offer any Classics subjects: she is self-taught in Latin and learned Greek from the summer school. We are extremely proud that she has been accepted to study Classics this autumn at the University of Cambridge. 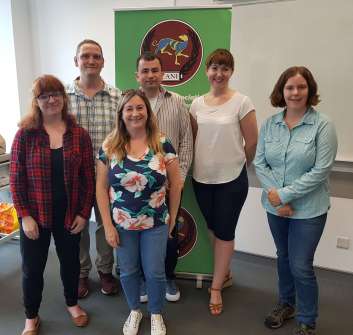 Academic talks were presented by Intermediate Greek tutor Dr Steph Holton who spoke about the interpretation of dreams in ancient Greek medicine, and CANI’s Dr Peter Crawford who offered evidence in a mock trial of Gaius Julius Caesar. On both occasions, there was standing-room only for these fascinating talks, with many interesting questions offered from the floor.  Many thanks to both of our speakers.

An informal dinner took place in Town Square on Botanic Avenue and was also attended by members of the CANI Board. After the concluding classes on Friday morning, certificates were presented to the students by Dr John Curran from CANI and QUB’s School of History, Anthropology, Politics and Philosophy.  Dr Curran congratulated the students on completing an intense week of study, and thanked all the staff for their hard work and enthusiasm.

Student feedback this year was overwhelmingly positive, in many cases expressing a desire for a longer course, more Greek and Latin!

“I would like to thank CANI for this amazing opportunity.”

“I liked the instructor’s energy and enthusiasm and want to come back next year for another class.”

“(The course) was very absorbing, thoroughly planned and a real pleasure to attend.”

We could not have had such great success without our wonderful students.  We love teaching Latin and Classical Greek and clearly there is an audience for these languages.

Plans are afoot for next year’s summer school so…

Posted by The Classical Association in Northern Ireland on Thursday, July 27, 2017

This entry was posted in Belfast Summer School, Previous Events.

Thinking About Signing Up for the Belfast Summer School?

If you are thinking about signing up the Belfast Summer School 2018, but are just not sure if it is for you, here are a couple of videos featuring answers to the questions you might have given by those who attended last year.

If this has made your mind to snap up one of the few remaining places for 2018 (or to start planning for the inevitable 2019 school), check out the following link for more information and the official brochure.

For those of you interested in the 2018 Belfast Summer School, you can click the following link – Summer School 2018 brochure – for a full brochure of the events and a form to apply!

Looking forward to seeing you there!

The Classical Association in Northern Ireland
Blog at WordPress.com.